The rate of carbon dioxide emission rights has risen by 50%. It is the next step predicted by ExMetrix forecast models. September 27, 2017 – Posted in: analyses

In the EU plants and enterprises handling a capacity exceeding 20MW and other industrial facilities have been obliged to participate in carbon dioxide emission rights. Throughout the whole of the EU, there are about 12.000 industrial plants including 850 companies in Poland. All of them have been receiving the emission rights of the specified amount of CO2. 1 EUA (EUA’s = European Union Allowances) is the unit of measurement warranting to the emission of 1 tonne of CO2.

The Kyoto protocol allows for the operation of the system throughout the world to achieve stated targets and standards, by which firms are required to reduce emissions which are not necessarily produced in their plants. They may participate in projects which are implemented, registered and regulated by an environment protection departments of UNFCCC in developing countries. Investors, as the participants in these projects, issue the individual certificates, the so-called, Certified Emission Reductions (CER). Companies may return theirs exchanged or purchased certificates in specified quantity to governments (22% in Germany, in Poland 10% of granted privileges in II settling period), as a reduction of emission (CER) and thus fulfil legally imposed obligations. In Germany, it is governed by act ZuG2012, §18, in Poland it is the 6th article the Council of Ministers May 16, 2008, in the national allocation plan for emission allowances. They can also be remitted as ERU certificates from JI projects (Joint-Implementation) which are energy efficiency projects in the countries of eastern Europe.

In 2018, all CO2 emissions certificates will become financial instruments.

Until January 3, 2018, the Markets in Financial Instruments Directive (MiFID) will enter into force in Europe. Shortly emission certificates will be treated as financial instruments.
Consequently after that date emission certificates available at the Spot market as well as those from the futures market (whether physically or financially encashed), will become part of the financial market. Therefore, they will be subject to the supervision of financial supervisory authorities.

In our article on the prospects for the Enea (Polish corporation in the power sector) rate of March 3, 2017, we have also published our opinion on CO2 emission rights, which was as follows:

“Besides there is every indication that prices of CO2 emission rights will begin to grow in 2017 .”

Our statement was based largely on the performance of the model of a three-month forecast horizon, which then indicated an increase in the price of emission rights until the end of May 2017: 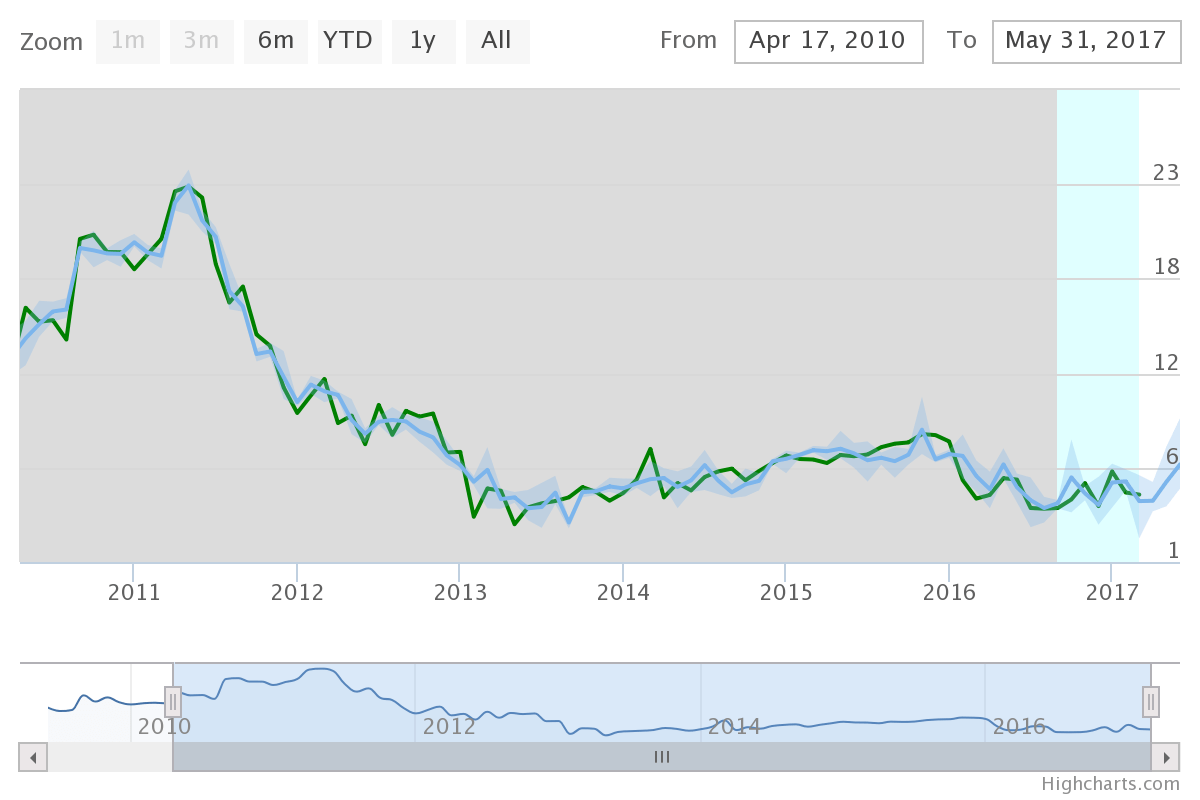 Our one-month-ahead forecast model suggested the beginning of the increase by the end of March 2017. The exact medium-term growth started in late April 2017. The exchange rate from around EUR4.4 increased by over 50% and now (22.09.2017) is 6.65 EURO. These a few months of monotonous growth took place after over a year of fluctuations around the level of 5 EURO.

The current six-month-ahead forecast model, (by the end of February 2018), indicates the possibility of continuation of the upward trend of April 2017, whereas the pace of growth in the second half of this period is likely to fall. 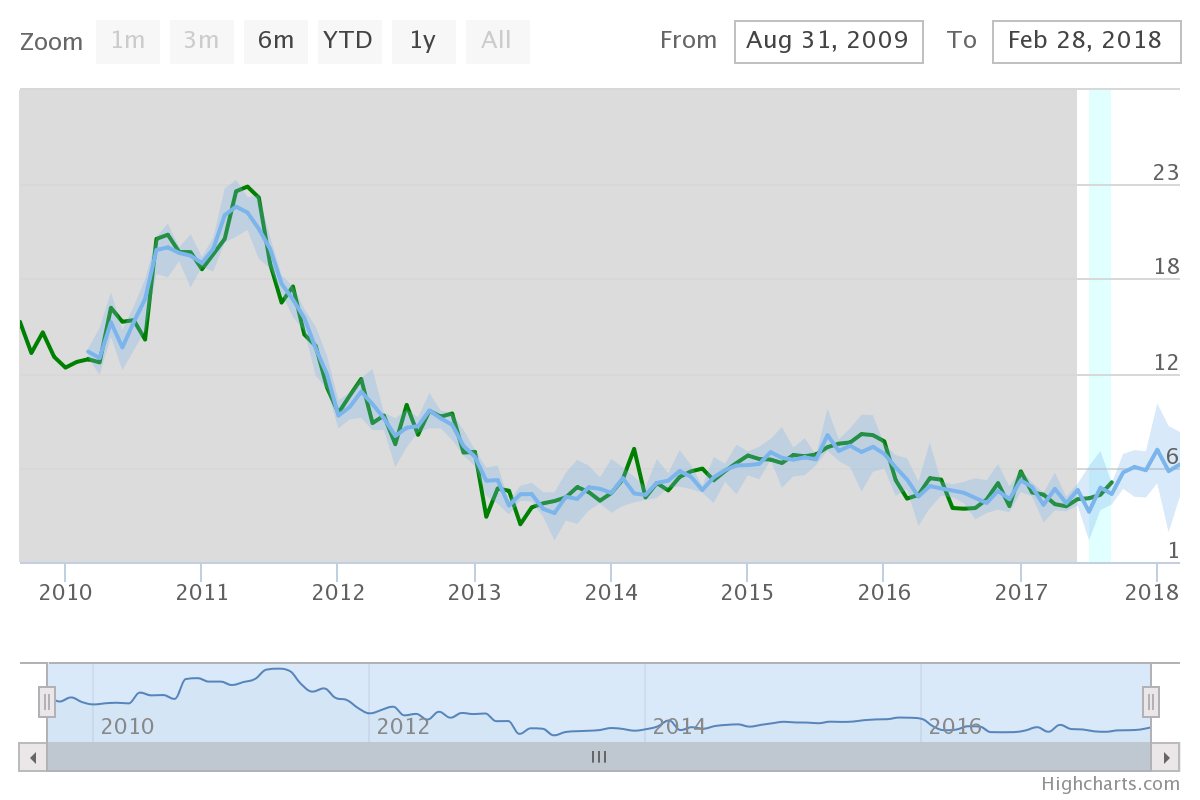 Exmetrix’s current CO2 forecasts correspond with the situation in the energy markets and energy fuels, indicating their strict relation.

Prices of the German energy market with delivery for next year have reached 3.5 annual maximum. On Tuesday (19.09.2017) German Power 1Y prices gained almost 2.5 percent concerning the previous closure. They were valued at a maximum of EUR 36.45/MWh. The reaction on the carbon market was immediate. The EUA Dec17 futures contract traded amounted to less than 3.5 million EUAs at 10:00 am, and in less than a few minutes it increased by another 2 million tonnes. Prices of emission allowances returned to the pre-vote level on EU ETS reforms after 20:20 pm and reached a maximum of EUR 7.20/EUA.

Despite the announcement of many countries concerning abandonment of the use of coal in the upcoming years and replacing it with renewable energy or gas, prices of coal have increased very strongly from the second half of May 2017. Indeed, the higher fuel prices reflected the cost of energy produced using the above-mentioned raw material, and the increased coal production demonstrates greater hedging needs of power companies. EUA prices have been steadily rising in the upward trend for more than four months, as the prices of the most frequently used raw material in the Polish power sector. Due to security checks, prices of coal gained 2.4% in the past week.

This increase in prices is also supported by ExMetrix forecasts models, indicating that the trend could continue for next several months. 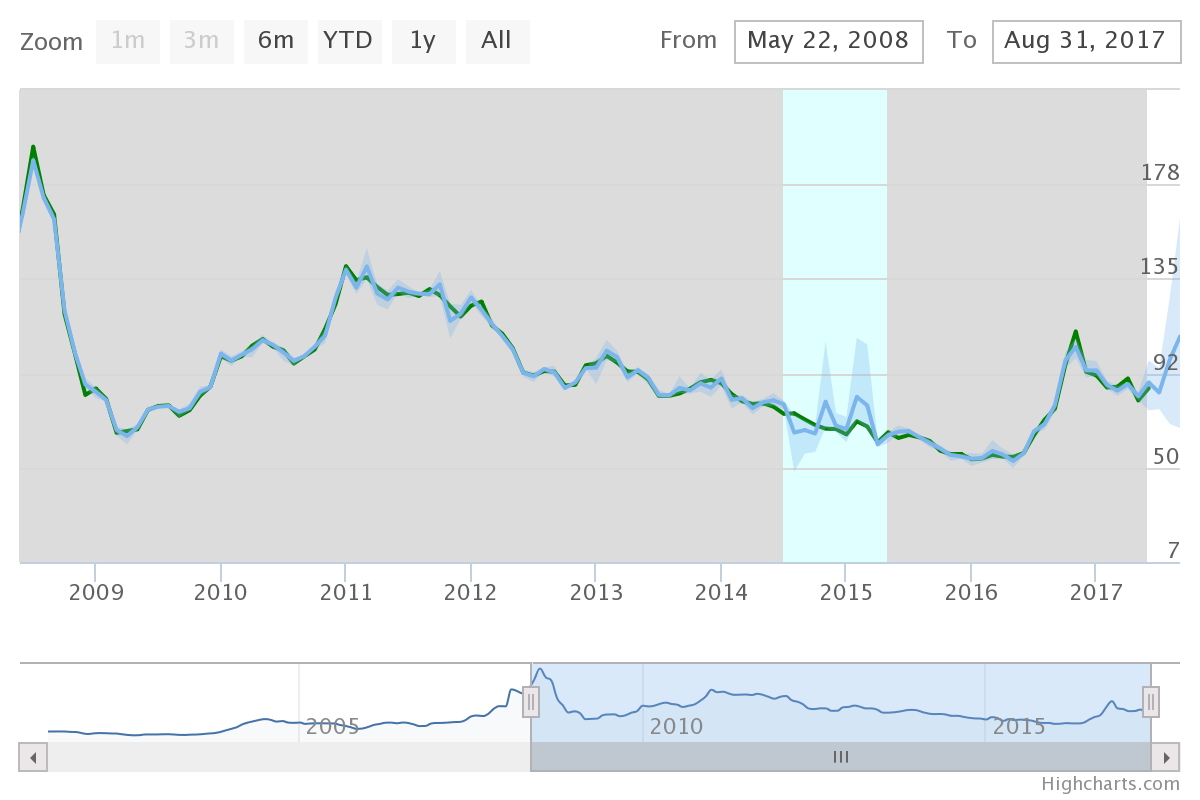 Oil prices also returned to their highest level from before almost six months. Despite a smaller correlation than the one we observed in 2016, oil continues to be considered by many analysts to be one of the key drivers of CO2 emission rights prices. The information coming from the United States on subsequent hurricanes affect global production and thus the price of crude oil.
It is confirmed by another ExMetrix model indicating the possibility of oil prices growth from late May 2017 to the end of February 2018. 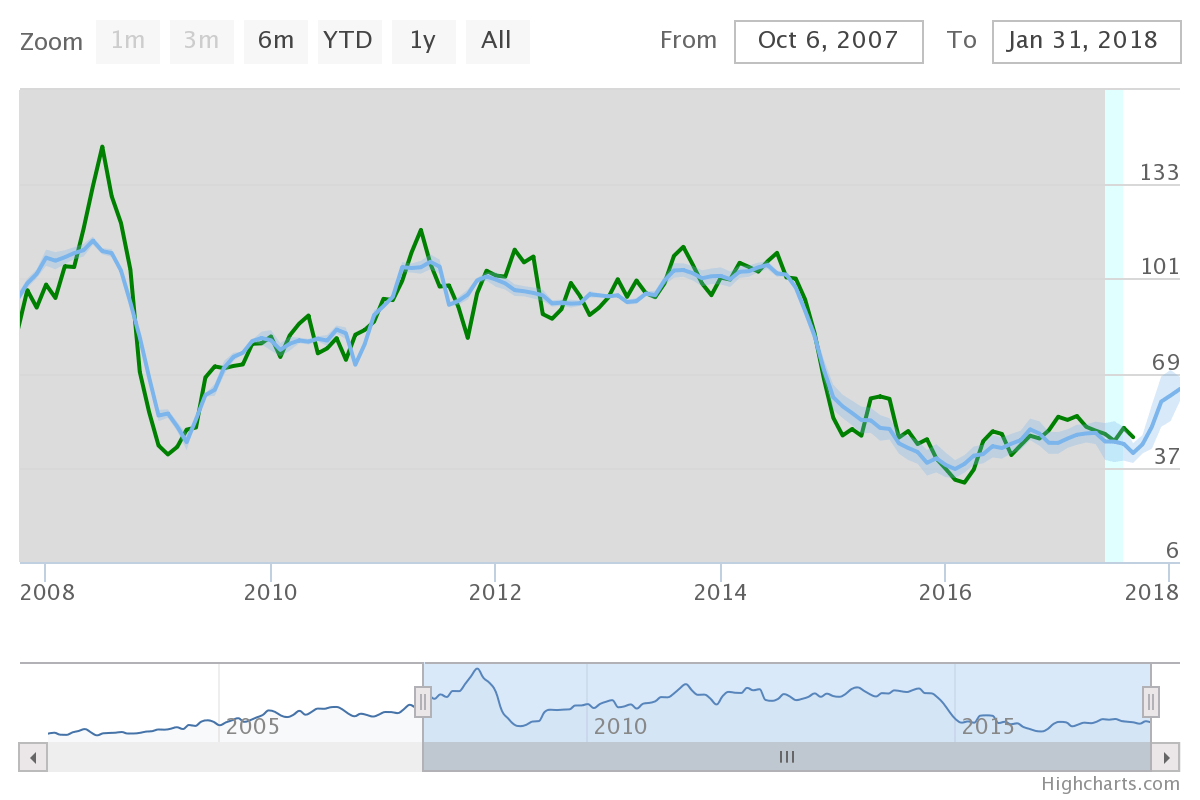 « Today is World Animal Day. The prices of pets have increased by 100% for the past 20 years.
In Malawi tonne of pepper costs 700 USD, and in Vietnam, the price is ten times higher. Whereas in Poland the price amounts to 22 000 PLN on the basis of a USD/PLN exchange rate at 3,5. »