A cryptocurrency – what is it?

Cryptocurrencies are the virtual and real mediums of exchange based on cryptography. They constitute a distributed accounting system which stores the information about possessing conventional units. Cryptocurrencies are available for every Internet user. Bitcoin is created digitally, by a community of people that anyone can join. Internet users create P2P network of nodes. Money is appropriately encrypted, hence the first part of the name – “crypto-”. Bitcoin is the most popular and the most valuable cryptocurrency at the same time, but Litecoin, Digitalcion, Dogecoin, Ethereum, et al. are also well known.

The idea of freedom

Decentralization is the major and inimitable feature of cryptocurrencies. They are designed in the way that neither author nor other people or groups or governments cannot manipulate, destroy, or forge it, seize accounts, and control Bitcoin’s flow or cause its inflation. There is neither a central authority nor anyone who would be able to decide about this digital currency. Bitcoin is, therefore, the deflationary currency. The total amount of money is ultimate and settled beforehand, and it’s floating into circulation is led by mathematical formulas. The transactions are made online at minimal or zero costs.

To use, or not to use. That is the question.

Beginners show considerable restraint. After all, cryptocurrencies are neither supervised by any banks nor countries, and they are beyond the control of governments.

Yet, cryptocurrencies have been accepted by many countries like Germany, Cyprus, and Denmark. Bitcoin is known for strong anonymity within the highly secured network. You can transfer your digital currency to any place in the world, and you don’t have to convert it. What’s more, transactions are commission-free. These are the major advantages of cryptocurrencies. Most of the online chain stores acknowledge virtual currency, and there is every indication that this tendency will increase.

Bitcoin is the most popular cryptocurrency. Indeed, it is the precursor of the entire digital currency system. Nonetheless, virtual currencies are non-exclusive; hence a variety of safe and similar cryptocurrencies emerged. Curiously enough, the idea of developing the digital money was only functional. Meanwhile, concerning its successes and increase in its value, it has become a tool of market speculators.

Cryptocurrencies are not the part of any central system. In fact, its users are its miners. When cryptocurrencies are generated computers are extremely overloaded, but on the other side people willing to buy the digital currency should know that it is also available on the stock exchange. There is no doubt that cryptocurrencies are the real revolution which will change the world of online transactions.

Satoshi Nakamoto – the creator of the first cryptocurrency.

No one knows who he is, or at least those who know him do not brag about it. Talking about Satoshi Nakamoto – who created Bitcoin – it is unknown where he comes from and what he does in his everyday life. Nakamoto is almost like a ghost. There are just a few facts, which does not in any way indicate a particular person. History of Nakamoto began in 2008 when under the same name he published the concept of creating digital currency (PDF file 180 KB). The document contains information that the author worked on the idea for two years, that is from 2006.

In January 2009 the first block of Bitcoins emerged called Genesis block, sometimes marked as Block 0. Six days later the Bitcoin v0. 1 was launched. At this point, it began the history of the most popular cryptocurrency today. By the end of 2009, were added 32 thousand of blocks, resulting in the total number of 1. 62 million Bitcoins. All transactions are available publicly (thanks to blockchain), and it can be concluded that just 1/4 from the initial number of Bitcoins ever changed its owner. This amount means that its developer is in possession of more than one million of BTC (1 million of BTC is nearly 1 billion dollars today).

Nakamoto has been an active user of forums about Bitcoins, and he upgraded his product all the time. It took place more or less to the mid-2010. After that time, he was less active, and in April 2011 he wrote to one of the developers, that “now he deals with different issues”. He stopped responding to emails. Then, there was no news about him.

Bitcoin: first electronic cash system based on the peer-to-peer network.

The high-value version of digital money, based on the peer-to-peer network communications (P2P – a means of communication in a computer network that grants all hosts the same permissions, unlike the client-server architecture), allows you to send payments online directly from one subject to another beyond financial institutions.

The so-called digital signatures also provide an opportunity to perform such transactions. However, the required presence of a trusted entity is the primary disadvantage of this solution. It is used to prevent double-spending.

A peer-to-peer network is a solution to the problem of double-spending. The network marks transactions using timestamps, hashing them to form a continuous chain of evidence of work done (the so-called proof-of-work).

It creates a record that cannot be changed without making modifications to the proof-of-work. The longest chain is not used only as the evidence of the occurrence of the sequence of events, but also as proof that it comes from the largest pool of computing power.

As long as most of the computing power is under the control of the network nodes, which do not cooperate with each other to attack the network, they will create the longest chain and overtake a potential attack. The network itself requires a minimum structure.

Messages are distributed by the highest duty of care, and the same nodes may leave and rejoin the network at any time, taking the longest chain of evidence of the work done as a confirmation of what happened during their absence.

Such a system of the electronic transaction does not require having to depend on trust.

Saving public transaction history causes that from the computing perspective the deal quickly becomes impossible to change for the potential attacker if only “fair” P2P network nodes control the majority of the computing power.

The network is devoided of any structure; therefore it is simple. The nodes work at the same time through a little coordination only. There is no need to identify them, since messages are not related to any particular place, and their propagation must be based only on the grounds of the highest diligence.

The nodes return a fixed-length, scrambled string of numbers and letters that look random with the use of its computing power, expressing its acceptance for the right blocks through the work of extending them and rejecting incorrect blocks refusing them. Any need to change the rules or incentives can be implemented only with the use of this mechanism to come to a consensus.

We haven’t got variables related to the traditional economy which would constitute any cause and effect relationship with prices of Bitcoin. Yet, we found most correlated variables without specifying a field of research:

However, after limiting the search to variables that contain such keywords as internet, game, goal, trade, gambling, gaming, telephone, mobile, or computing power and building the Bitcoin price model it turned out that the biggest impact on the model had the following variables: 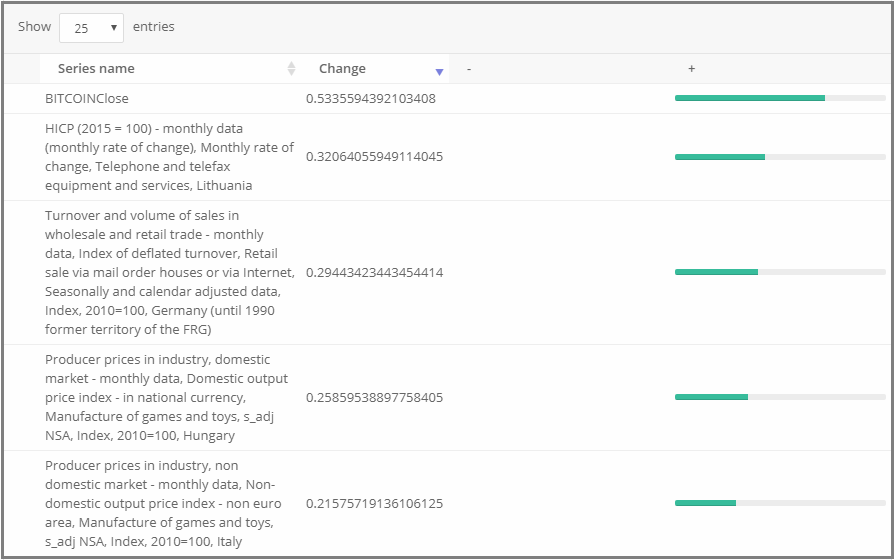 Results of the model were as follows: 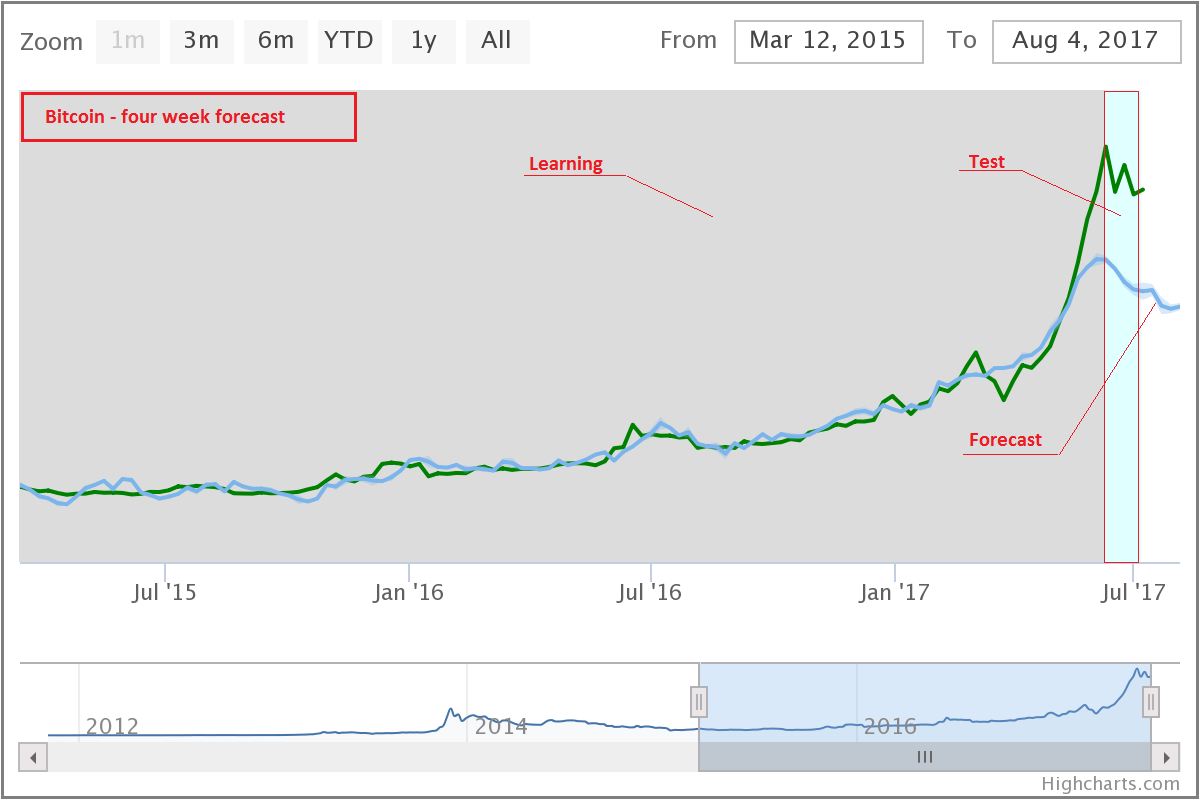 The model correctly identified the significant turning point (peak), although the forecast error itself that determines the maximum level of the rate was relatively big. However, machine learning has allowed the precise specifying a range of adjusted rate (it fell by 2893,5 USD on 10.06.2017 to 1895,64 USD on 16.07.2017). 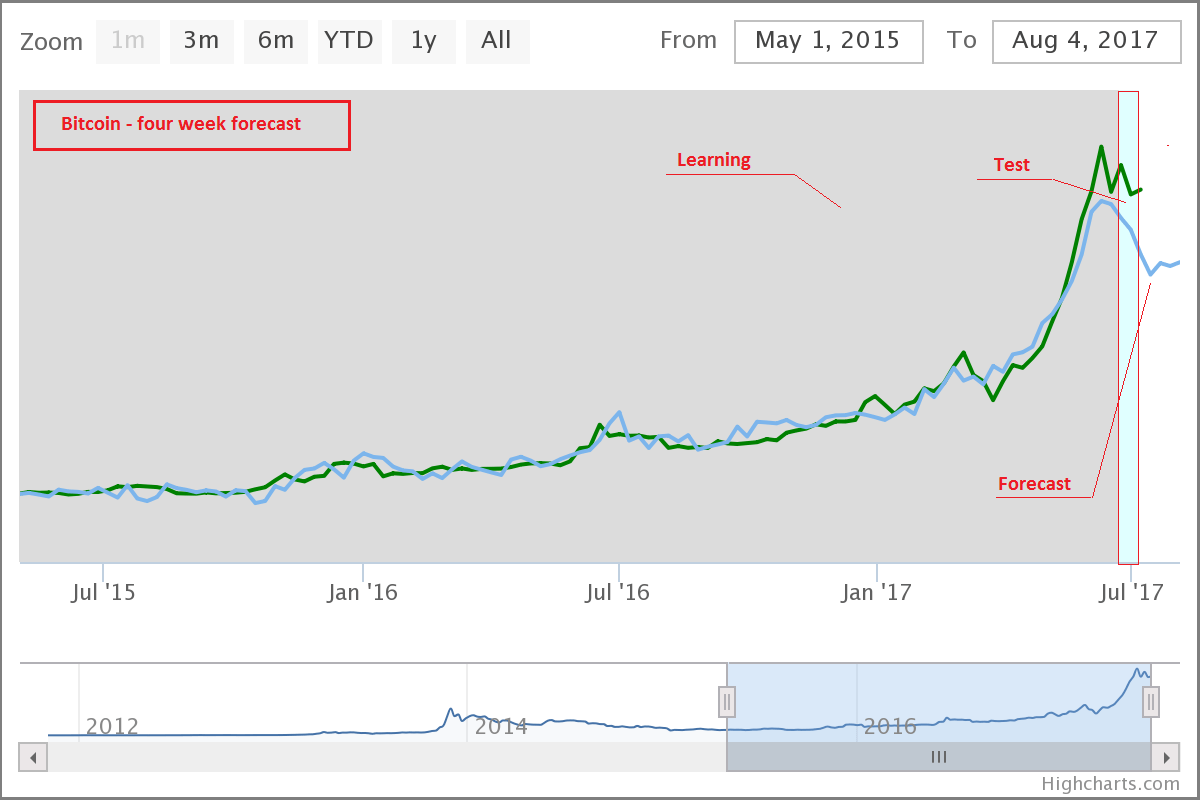 Besides, the model quite accurately determined the beginning of rally decline (exactly on 14.07.2017). We believe that further work on models relating to cryptocurrencies and primarily on identifying key variables will enable us to perform models much more satisfactory soon.

« Soaring prices of butter in Poland. This problem also comes up in other countries.
Non-smoking is still in fashion in Poland »