More and more signals of fundamental importance indicate the possibility of strengthening the euro in the medium term. For the time being, the course is not yet confirmed, but recent forecasts by ExMetrix prove its growth.

Expiring events such as the French election and better US data as interest rates rise there may lead to an increase in demand for the European currency, and this will be reflected in the live currency pair charts. This process may be reinforced by the ECB. If statements about possible deviations from the equity keys are confirmed, it may strengthen the euro. From this point of view, the ECB’s commitment to the debt markets would be desirable, although the QE program is expected to continue until the end of 2017. However, the ECB’s previous actions have slowed down the economy and adversely affected the euro against the dollar. If the QE program was modified accordingly, it could reduce the negative impact on low-interest rates and have a positive impact on future economic conditions, in particular for those European economies that have been stagnant for some time. It may favour the inflation growth which is currently quoted mainly due to the prices of energy and food products (because core inflation is not yet obvious). In addition, the ECB’s projections for GDP growth are quite optimistic (2017: 1.8% – 1.7% previously, 2018: 1.7% – 1.6% previously, 2019: 1.6% – 1.6% previously). And for the path of inflation (2017: 1.7% – 1.3% previously, 2018: 1.6% – 1.5% previously, 2019: 1.7% – 1.7% previously).

The ExMetrix models for the EURUSD pair of the six-month horizon built in October 2016 on data by the end of September 2016 indicated a decline in quotations by the beginning of the second quarter of 2017. The current models forecasted by the chart show that in March 2017 should start the rise of the EURUSD rate in the half-year perspective. 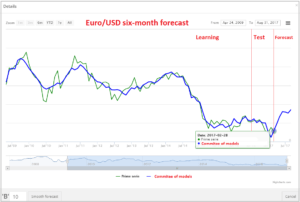 « The analysis of business and market cycles on the ExMetrix platform
Non-ferrous metals market booming with anticipated correction in the second quarter of 2017. »