Germany and Poland are the biggest cigarettes producers in Europe August 28, 2018 – Posted in: lifestyle, posts 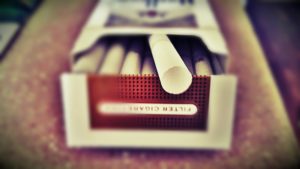 Germany is the largest cigarettes producer in Europe. The country produced 167.7 bn pieces in 2016 what makes it the frontrunner in the EU. According to numbeo.com, the average price per 20 pack of Marlboro is 6.30 euro. From the end of 2014, the harmonized index of consumer prices (HICP) representing cigarettes and published by Eurostat rose by 14,5 percentage points.

We carried out a correlation analysis using the automated selection of variables and we obtained a few intriguing results.

The results after the correlation analysis using ExMetrix

In Germany, the harmonized index of consumer prices regarding cigarettes is strongly correlated with another index describing hospital services. As is well known, smoking is harmful and it requires high expenditures on medical services.

As for Poland, it turned out that harmonized index of consumer prices representing cigarettes is strongly connected with the level of employment in the Polish business sector (the data come from the Central Statistical Office of Poland). The higher the employment is, the more the index increases. Cigarettes are not the cheap entertainment in plain view.

Concerning Serbia, we found out that the index describing the level of prices of cigarettes is strongly associated with another harmonized index of consumer prices representing restaurants, cafés and dancing establishments. Both cigarettes and any high-quality eating house can be expensive and may be considered to be luxury goods.

« In Italy, over the last 14 years, the index covering the people at risk of poverty or social exclusion has grown by over 2 000
Germany dominates in the European automotive industry and the highest number of old cars at the age of 10 to 20 years is in Italy »